Mid Ohio Sports Car Course. Located halfway between Columbus and Cleveland it's one of my favorite stops on the schedule. People here love motorcycles, in fact Ohio is third in the nation in retail motorcycle registrations I have heard. It's easy enough to believe and Ducati has rewarded all that 2 wheeled enthusium with a round of the Ducati Superbike Concorso contest two years in a row.
Photos and captions by Vicki Smith and Shannon Smith
Read More 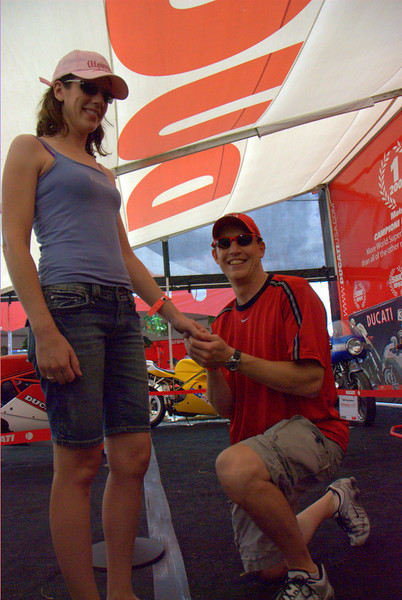 That's Kevin Drum and Amy Chraston. Kevin knew he was going to propose to Amy sometime over the Mid Ohio weekend. After two years of dating, he was sure she was the one. Maybe the gift of a custom made Ducati Corse necklace was the last sign he needed, or it could have been that she knows each of his three Ducati's almost as well as he does. Whatever the reason, he had the ring all ready and was just waiting for the right time. That time came in the middle of the Ducati Superbike Concorso tent Saturday afternoon - in a completely spontaneous moment, surrounded by a room full of Ducati's, Kevin asked Amy to marry him and she said yes, much to the delight (and surprise) of the people all around.
Showing off the necklace Amy bought him, Kevin said he bought his first Ducati in 2000 and now has three, all highly modified - a 748, 996R and 1098 Tricolore. When asked "Why here?" He said I'm the Ducati guy, it's what I love and this just seemed like the right place"
Oddly enough, it's the second proposal, there was one at the Laguna Seca round as well. Maybe it's in the Ducati water! Ladies, if your Ducati guy needs a little push, next round is Indianapolis Motogp!